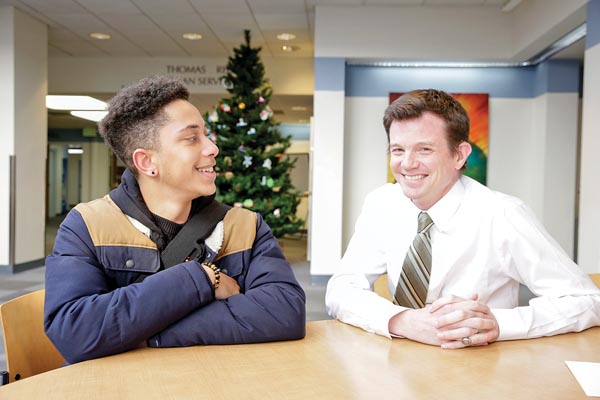 Justin Christensen with Henry Davis ’17, one of several students who offered feedback to the Social Science Department at an Academic Council meeting. 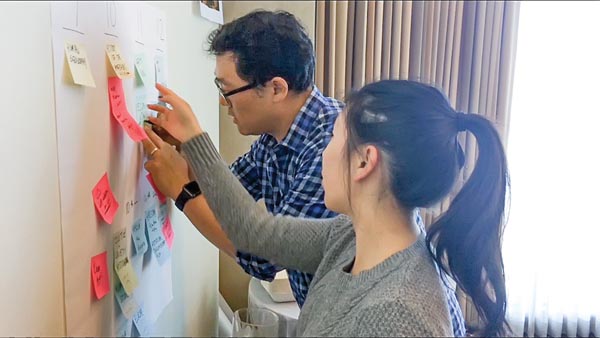 Psychology teacher Yosup Joo getting feedback from Angelina Hue ’16 on his prototype. 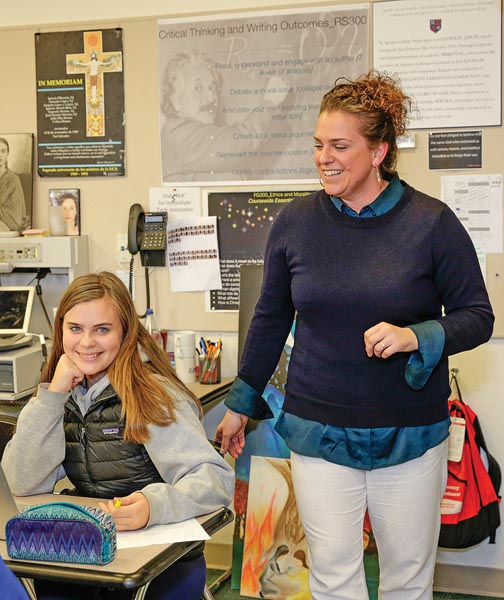 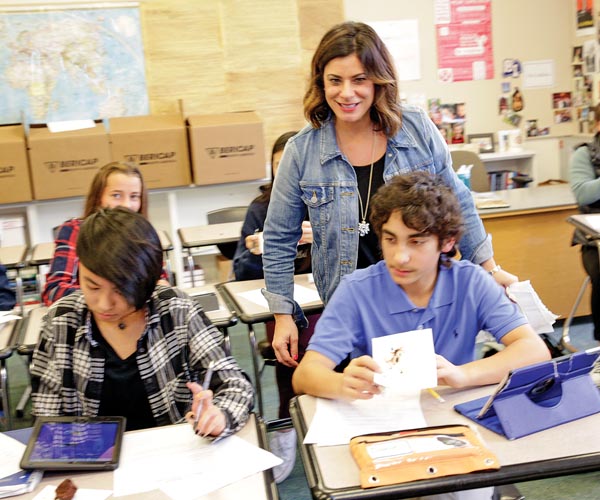 Who knows best what students need to learn?

For teachers in the social science and religious studies departments, the answer, they discovered, was “All of the Above.” Thanks to surveys and interviews with a variety of stakeholders and an innovative process called Design Thinking, students next August will find significant changes to their lineup of classes in these departments.

Coined in the late 1960s, the term Design Thinking comprises a process that asks teams of people to discover what people need and want and then to collaborate on prototypes, quickly test them and modify the best of the breed.

After a year of work, the Social Science Department will now offer a semester course called Introduction to Ethnic Studies to freshmen, a yearlong course called Modern World History to sophomores, U.S. Histories and Cultures to juniors and a range of one-semester courses for seniors including Constitutional Law, San Francisco Politics, Criminal Justice, Social Movements and The Black Experience. Other electives include Social Cognitive Psychology, Behavioral Neuroscience, Economics and European History.

Another sea change for the department is the replacement of the AP Program with a modified Honors Program. In past years, many students took AP US History, AP Government, or AP Psychology. Students will still have the option to take these exams with support from the department. The Honors Program will also end the practice of separating students into tracked courses. Instead, students will apply for honors-level work while remaining in a heterogeneous class. If accepted, they will be given more assignments and receive bumps in their GPA. This is consistent with many honors programs at the university level.

Based on the success of this curriculum revision, the Religious Studies Department began their own Design Thinking process to adjust courses for ninth and tenth graders. Next year, freshmen will take a full-year course and sophomores a one-semester course — the opposite of what they currently do — in part to respond to the shift in the Social Science Department and because the department believes students at a Jesuit, Catholic high school would benefit from a year-long religious studies course in their freshman year.

The changes began when Justin Christensen, now in his second year of chairing the Social Science Department, asked his colleagues in May 2015 what they believed to be the big-picture questions students would face in the next few years.

“My department wanted to take a step back and examine how well we were meeting our students’ needs,” said Christensen. “When the department met again in the fall, they voted unanimously to allow me to find a process by which we could tackle that question.”

Christensen then attended the Design Thinking InspirED conference along with fellow department members Eric Castro ’92 and Katy Dumas as well as engineering teacher Mike Santos and Jennifer Gaspar-Santos — SI’s director of educational technology and innovation, who had Design Thinking training and experience.

Gaspar-Santos first experienced Design Thinking at the Nueva Innovation Lab in Hillsborough in 2004. “At first, I thought it might be a trendy Silicon Valley buzzword, but I began seeing avenues to apply it.” She used Design Thinking at her previous school, Castilleja, and later learned that it had been a tried-and-true process since the 1970s. “It’s a human-centered approach to solving problems that involves empathy as well as iteration, prototyping and testing. Rather than designing in a vacuum, people look to others to inform their design and then build and test prototypes quickly. We try to fail as early as possible in order to succeed faster. The faster we test prototypes, the closer we get to solving problems.”

In addition to helping the Social Science Department and the Religious Studies Department, she has led workshops for the Advancement Team and the Wellness counselors to help them set goals and determine strategies.

Last spring, pairs of Social Science teachers began the investigative process by conducting surveys and interviews and meeting with focus groups. They included in their research current seniors and freshmen, teachers at SI and at other high schools, SI alumni in or recently graduated from college, professors and employers.

“When asked to come up with something new, we all have a tendency to skip ahead and begin brainstorming ideas,” said Christensen. “That’s why I fell in love with Design Thinking. You have to go through a process where you resist the tendency to rely on anecdotal perceptions and biases. Only after our study did we see that we were behind the curve in some aspects.”

Members of the department then spent a day off campus to brainstorm solutions by creating prototypes of a four-year sequence of courses. Gaspar-Santos led the session, which also included SI’s Director of Equity and Inclusion Matt Balano, Holy Name’s principal, a USF economics professor and Ashley Summers ’03, a legislative aide to Supervisor Katie Tang.

“These people looked at our prototypes and asked if they were meeting our students’ needs,” said Devencenzi. “That’s what Design Thinking challenges us to do.”

The day ended with three models rising to the top, and the department reflected on those four-year plans over the summer. Teachers received feedback on the three prototypes from SI’s Academic Council and outside experts such as Allyson Tintiangco-Cubales, Ph.D., an SFSU professor in the Asian American Studies Department and an expert in ethnic studies curriculum development.

When they met at the end of the first quarter, a dozen of the 15 teachers opted for one plan. “But we spent the day tweaking that prototype even more,” added Christensen. “You’re never done in Design Thinking, as it calls you to continue iterating.”

SI’s Academic Council then heard the proposal from the Social Science Department in October, and, based on the council’s feedback, Principal Patrick Ruff approved the changes.

Christensen understood that some parents and students might question the logic of dropping courses designed to teach specifically to AP tests. “We made this change because our students need courses that offer more relevance to them. In the past, we would spend most of April and May reviewing for the exams. By not teaching to the U.S. History Exam, we can go deeper into the 1960s, ’70s and ’80s so that our students better understand what happened in the late 20th century. By not teaching to the AP U.S. Government Exam, we can give our students more choices to explore how they will become politically active. Students, however, can still take these exams on campus, and anything we aren’t covering in the courses, we will provide support so that students can fill in any gaps they might have. We are mindful that students like getting AP credit so that they walk into college with a head start.”

The lack of tracking will also allow for a wider mix of students in each class, and students have the option of applying for honors-level work in each upper division course. “We found many colleges offering this option,” said Christensen.

“Students will find that dropping the ‘AP’ designation won’t reduce the rigor of our courses but make them challenging, authentic, student-driven and meaningful,” added Devencenzi.

The ethnic studies curriculum, she noted, “will help our students become culturally competent and gain cultural humility. We need these 21st century skills, especially in college and the workplace, where our students will work with people from a wide variety of backgrounds. They need to learn to talk about race, culture, gender, religion and sexual orientation, to see diversity as a strength and to look at issues through a variety of lenses. As Ignatian educators at a Jesuit school, we call our students to be counter-cultural and talk about topics in a way that is healthier than what is modeled in the media. The only way our students will grow is if we arm them with the language and knowledge they need to change personally and to make changes in the world. We also need to teach them to learn to listen in order to understand rather than listen only to respond.”

The addition of the ethnic studies course also responded to a need identified in the accreditation report that called for curriculum review and revision pertaining to diversity, equity and inclusion. “In response to feedback, data and research, we have worked for years to figure out how to add an ethnic studies graduation requirement,” said Balano. “We have worked with internal committees, such as the Diversity Inclusion Group, and external consultants who advised us how to proceed.”

Balano is a veteran at teaching ethnic studies, having co-created the Burning Illusions course with Lizette Dolan ’94; this year, he taught a revised version of this course as a senior English elective to students who also received three CSU credits for their work.

Christensen added that “our young alumni tell us that they wished they had ethnic studies in high school, as they are finding employers looking for candidates who excel in cultural competency.”

“As our society changes, our schools need to change to meet students where they are and prepare them for where they’re going,” noted Devencenzi. “This is what Ignatius did and what we need to do.”

Midway through this process now, the Religious Studies Department has gathered information from high school and primary school teachers and students, from alumni and parents, from directors of religious education at the parish and archdiocesan level and from “other industry stakeholders, such as rabbis, imams and other religious leaders,” said Shannon Vanderpol, chair of the Religious Studies Department.

Her department has also interviewed life coaches and psychologists. “These people are good at marketing, and we have to learn from them in order to communicate powerfully the messages found in the gospels.”

Her department hopes to create prototypes for freshmen that dovetail with the social science ethnic studies course. “This is an exciting overlap for us, as our lens on equity is the same lens we apply to the mission of the school and our mission as Catholics. How do we help students grow in their identity and continue the traditional voices that come from the bishops’ curriculum and our catechism? We need to create spaces for the voices we don’t often hear and invite people to the table who don’t normally get invited. To do that, I want to use the best practices from every possible constituency.”

Vanderpol hopes that the new curriculum will respond “to the trend for U.S. Catholics to be less and less catechized each year. The exciting challenge for us is to see how we can form people in the Catholic Church in ways that animate and engage modern culture and students’ needs and that invite them into what is really life-giving about the Church.”

Carole Nickolai, SI’s assistant principal for academics, praised the efforts of the two departments. “Since I’ve been working at SI, I have sought ways to ensure that our curriculum prepares students for a global society. I’m impressed with and appreciative of these teachers who are willing to lean in and try this. I expect our students will have a rich experience that will better prepare them for college. Kudos to the women and men from both departments who are working laboriously to create courses and curriculum informed by data and the best research.”