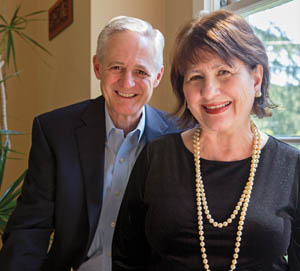 Looking around SI’s Sunset District campus, you will find the work of many architects and contractors, including, most recently, buildings designed by architect Randy DeVoto ’68, who played a major role in expanding and remodeling the school’s facilities starting in 1988.

The Society of Jesus and SI have shaped and influenced many generations of the DeVoto family, starting in 1924 when Randy’s father entered SI as a freshman at the Hayes Street Campus. That mutual connection and strong bond to the Jesuits led Randy and his wife, Marlene, to join the Father Harry V. Carlin Heritage Society, when they named the school as a beneficiary of their estate.

Randy recalls the Jesuits at SI from his days as a student, men such as Rev. Anthony P. Sauer, S.J. (English teacher), Rev. Curtis Bryant, S.J. (humanities and drama teacher), Rev. Thomas Buckley, S.J. (Latin teacher), Nicholas Weber (speech coach), and Rev. John Becker, S.J. (advisor). “They all spent much time helping me. They didn’t have to, but they did because they were men for others. They, like so many other Jesuits, have supported every member of my family over the years.”

The Jesuit influence in Randy’s life extends to his father (Albert), brother (Terry), three daughters (Anna, Jenny and Lisa), niece (Carolyn) and nephew (Mark), who all graduated from SI. The Jesuits even led to Randy meeting his wife, Marlene, while attending Gonzaga University in Spokane, Wash., and they also attended the Gonzaga in Florence Program together in Italy during their junior year of college. Randy went on to earn two degrees in architecture from Washington State University and gained both experience and stature as an architect while practicing his profession in San Francisco.

In 1988, SI contracted with his firm, Corlett, Skaer and DeVoto Architects (currently CSDA Design Group) to prepare a master plan that would help the school in its transition to a coeducational campus. His firm remodeled the Student Activities Center and designed many new facilities, including the McCullough Gymnasium, the Herbst Natatorium, the covered parking garage and the rooftop tennis courts. Later, during the Genesis V campaign, CSDA designed the West Campus expansion, which comprised the Gibbons Hall of Music, the Doris Duke  Wall Choral Room, the Columbus Piazza, the Ryan Weight Room and five new classrooms.

During that time, Randy strengthened his relationships with Frs. Sauer, Carlin and Prietto and the SI Development team, including Steve Lovette ’63, then SI’s vice president. He also worked with SI’s former regents and advisors such as Bill McDonnell ’42, Jay Fritz ’58 and Alfred Wilsey ’36. “They were legends in the business community, and they walked me through the whole process. They treated me so kindly, with their guidance and respect. Our gift to St. Ignatius is our way of saying thank you for the role the Jesuits have played in our family’s life. It gives us a great sense of satisfaction that we are able to give something back to the Jesuits who have enriched our lives in so many significant ways.”