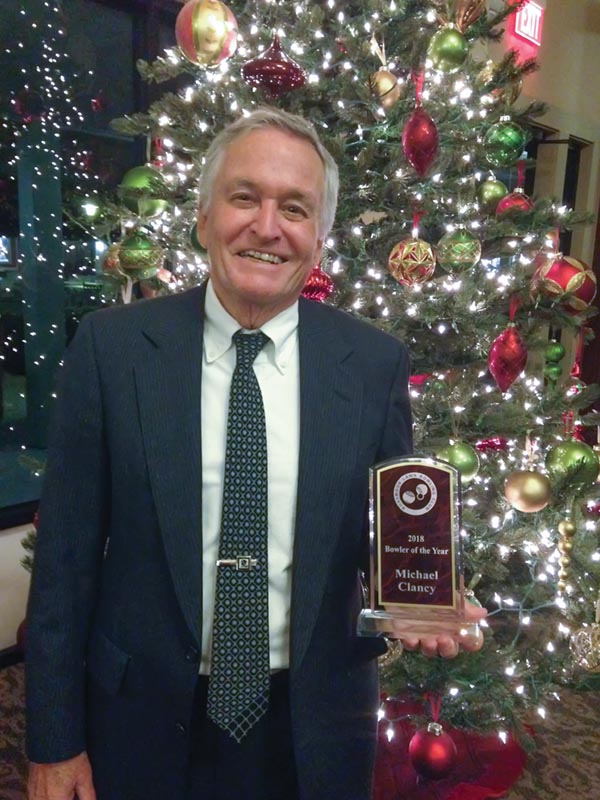 Michael Clancy ’59 had a hard life growing up, marked by parental illness and poverty.

By his early 40s, he rose to become a successful attorney and a multimillionaire who spent his days golfing and traveling the world when he wasn’t living in his Nob Hill penthouse.

Now, at 79, he plans to help students at SI — as well as St. Vincent’s School for Boys and Hastings Law School — by creating scholarships named for him and his brother Bruce ’51.

Mike’s story begins even before he was born. His father, Ambrose Clancy, eager to serve in WWI, left Chicago at 16 for Canada, where he lied about his age and enlisted in the army. While serving in France, he was bayoneted and gassed, which led to ill health and seizures throughout his life. 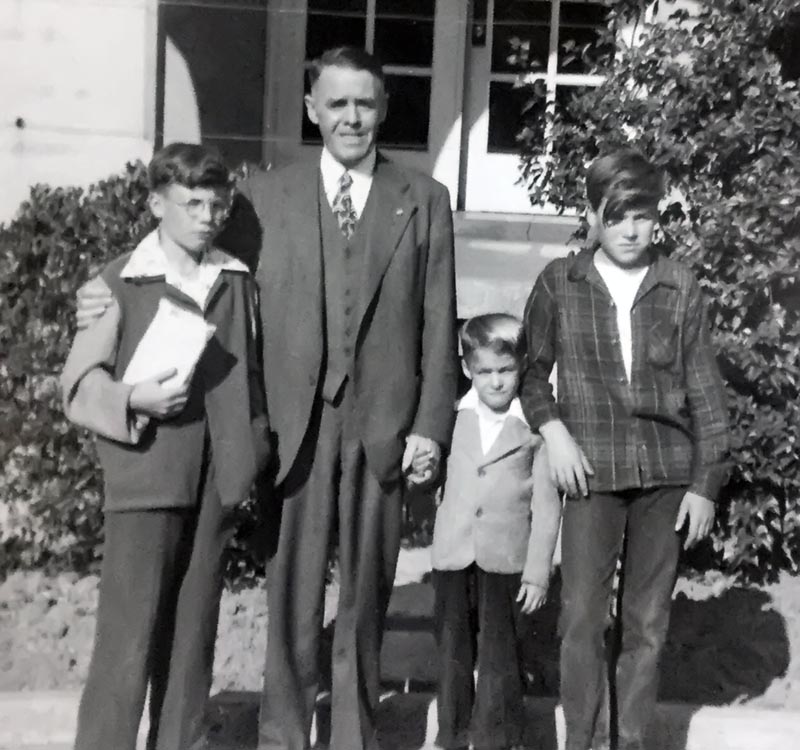 Above from left: Patrick, Ambrose, Michael and Bruce Clancy.

He married in 1933 and had four children — Bruce, Patrick, Juneva and Michael, who was born in 1941 in San Francisco. Doctors treated Ambrose with electroshock therapy, which hurt more than helped.

After he and his wife divorced in 1943, Ambrose stayed in San Francisco and worked as a longshoreman, and his wife remarried and moved her family in 1945 to Oregon, where she became seriously ill. When told that she might not survive, she asked Ambrose to care for the children in San Francisco.

“While my father took charge of us, he lived in a rooming house south of Market Street with no money and poor health,” said Michael. “That’s how my two brothers and I arrived at St. Vincent’s School for Boys in San Rafael in 1946 and my sister Juneva at Mount St. Joseph’s in San Francisco.” 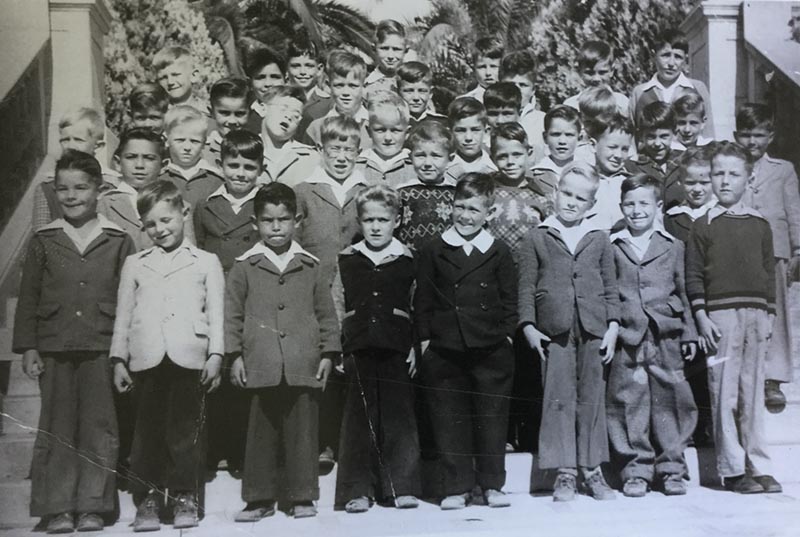 Michael (front row center) along with his St. Vincent's classmates.

Founded during the Gold Rush as a home for orphans and boys whose families couldn’t support them, St. Vincent’s was Michael’s school and home from ages 5 to 10. “My father would take long bus rides from San Francisco once a month on visitor’s Sundays and liked walking up the long tree-lined road from the bus stop to the school to see my brothers and me, and he would also visit my sister monthly too.”

Michael’s mother did not die from her illness, and after her marriage with her second husband ended, she returned to San Francisco and remarried in 1951, when she took her two youngest sons out of St. Vincent’s. Bruce was drafted into the U.S. Army, and Juneva was sent to live with another relative in Northern California. When Patrick turned 17, he joined the Marines Corps, leaving only Michael to live in the Tenderloin with his mother and her new husband. Michael’s father died the next year at the age of 51 from injuries suffered from a fall brought on by a seizure.

Michael finished grammar school at St. Boniface before enrolling at SI, which his brother Bruce had attended, though neither had money for tuition. “The priests were always after me to cut my hair, but I couldn’t even afford to do that,” Michael added. Harry Carlin S.J. ’35, SI’s vice principal at the time, told Michael that he could not attend classes if his hair wasn’t shorter, “so he would give me a dollar whenever it was too long and tell me to go to USF to have it cut by the barber there.”

In 1958, Patrick finished his stint in the military and rented a studio apartment near SI, where he provided Michael with a place to study and sleep. Michael, in turn, worked afternoons at a drugstore inside the St. Francis Hotel to help with expenses. 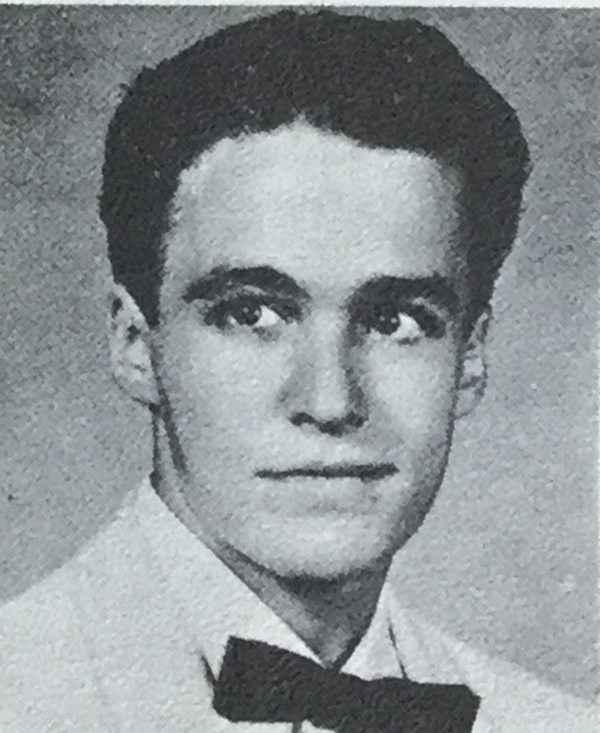 At SI, Michael thrived in his religious studies “thanks to my training at St. Vincent’s and its Dominican nuns and priests. My SI classmates called me a little heretic because I always loved to debate aspects of religion with the Jesuits. Despite that, the Jesuits proved kind to me. I couldn’t afford a school ring, so one of the scholastics asked me to take ring measurements and orders at the bookstore in exchange for a free ring.”

A year later, Robert Leonard, S.J., who had served as SI’s principal between 1955 and 1957, handed Michael an envelope containing $10 and said it was a gift from an anonymous benefactor. “I suspected the money had come from Fr. Carlin,” said Michael. Fr. Leonard suggested that Michael use the funds to pay for a haircut and buy a white shirt for his high school graduation.

After leaving SI, Michael started classes at City College, but unable to keep up with his lessons, he dropped out the following March. A month later, he landed a job as a driver for Josephine Feldman, the wealthy widow of a merchant, whom he had first met when she shopped at the drugstore where he worked.

“I worked for Mrs. Feldman for the next seven years without ever taking a day off,” he added. She convinced him to enroll again at City College, where he earned his AA degree followed by a bachelor’s degree from SFSU in 1964 and a law degree from Hastings.

While a law student, he received a scholarship created by Mrs. Feldman in both his second and third years. “I didn’t know she had created the scholarship until I had received it,” he noted.  She later attended Michael’s Moot Court argument and his law school graduation. Even though he stopped working for her to study for the bar exam, the two remained close friends until her death in 1983.

Michael worked for the Franchise Tax Board both before and after a stint with Standard Oil Company of California as a lawyer in its Tax Department and retired in 1995. He is currently living in a retirement community in Walnut Creek.

“Even when I was at SI in the 1950s, I knew there were students from wealthy families as well as students like me, whose parents had fallen on hard times and who couldn’t afford the tuition. In a past issue of Genesis magazine, I read with great interest the obituary of Curtis Mallegni ‘67, who, like me, had lost his father at a young age and who was helped at SI thanks to angels who had materialized. I’m hoping that the money from my memorial fund will help future students for years to come.”

If you would like information about joining the Father Carlin Heritage Society, contact Planned Giving Coordinator Annie Reilly at (415) 731-7500, ext. 5122, or email her at areilly@siprep.org.