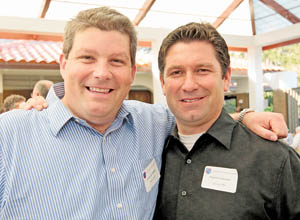 Fred Molfino Bequest to SI Invests in “Kids like Me”

Investment manager Fred Molfino '87 wants students from families like the one that raised him to have the chance to attend SI.  “I came from a very loving family, but we never had a lot of money,” said the San Francisco resident and father of two.

While a student at Our Lady of Mercy School in Daly City, he won a small scholarship to SI. As a result, he received what he calls “a fantastic education.”  “And this was more than in the book sense,” he added. “SI taught respect and integrity,” virtues he said he found embodied in SI teachers like Rev. John Murphy, S.J. ’59, and Rev. Ed Harris, S.J. ’63. “There was something about the way they handled themselves, the way they showed compassion. They made me want to be a man for others.”

In 2003, when he and his wife, Michelle, drafted a revocable living trust, they included a few nonprofit causes as beneficiaries, SI among them.  “I had a very good experience at SI,” he said, adding that his SI friends, faculty and administration “augmented the values instilled by my family.”

He also recalled lasting friendships forged at his SI senior retreat. “Kids are vulnerable at that age, uncertain as to who they are. Very strong and lasting relationships resulted from that retreat.”  Molfino graduated from Boston College, where he studied economics and philosophy. He set up a memorial fund for his mother at SI after she died at age 49.

After college, he worked successfully for 17 years at large investment companies. In the wake of the financial turmoil that led to the collapse of some Wall Street firms, Molfino and two of his colleagues at Morgan Stanley Smith Barney formed, in August of last year, their own company, Three Bridge Wealth Advisors, an independent financial advisory firm in Menlo Park.  A number of clients came with them.

He and his two partners discussed for months the pros and cons of leaving a world of six-figure salaries and bonuses for the uncertainties of an independent start-up.  “Everyone was touched by the financial crises,” Molfino said, describing shaken investor confidence in large firms. We started thinking we could better serve our clients if we started our own company rather than simply jumping from one big firm to another."  The Wall Street Journal used the Three Bridge startup as the lead in a January 2010 story on the number of big-firm brokers leaving to manage money on their own.

Molfino sees his SI bequest as an investment in the future of kids who could thrive at the school, but whose families, like his own in the early 1980s, could not afford the full tuition.