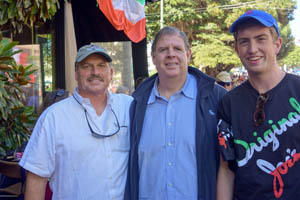 Frank Howard Jr. ’75 recently celebrated the 20th anniversary of Howard Consulting Group, a DC-based strategic communications and public affairs firm founded by Howard in 1995.
While the demands of working with clients as diverse as former Pakistani President Pervez Musharraf, RTI International and the Partnership to Fight Chronic Disease include 80-hour weeks, international travel and navigating the highest levels of government, Howard is never far from his SI experience.

“What I learned at SI gave me the discipline to take on any challenge,” Howard said. “Our class was close. We shared a common bond of intellectual and spiritual curiosity fostered by the Jesuits. My SI classmates are still some of my closest friends.”

A former Marine, Howard began his private- sector career working in finance and equity trading for regional and international Wall Street firms. Following stints in the food and beverage industry in the Bay Area, he transitioned into politics full-time in the late 1980s as a campaign staffer for U.S. Senator and Governor Pete Wilson, as well as assignments with Governor George Deukmejian and President Ronald Reagan’s re-election campaign.

After serving as a Western Regional Media Advisor/Spokesperson for the Republican National Committee during the 1992 cycle, Howard went to Cambodia in 1993 with the International Republican Institute, supporting the efforts of the United Nations Transitional Authority in Cambodia (UNTAC), where he trained Khmer political parties and activists about democracy and political campaigns. He did similar work in many other countries, including Mongolia, China, Tajikistan and Sri Lanka.

While in Phnom Penh, Howard played at the National Olympic Stadium in a two-day rugby tournament with UNTAC servicemen from over a dozen countries.  “I first saw rugby when I was 9, when my father took me to see a hurling match in Golden Gate Park. At one point I turned around to see a different game and had to ask my dad what it was.” Playing rugby for the first time in college, Howard has been an enthusiastic player, supporter and organizer of domestic and international rugby competition ever since.

Howard loves lacrosse as well. He is an at- large member of the Board of Directors of the Tewaaraton Foundation, which honors the Native American history of lacrosse and recognizes annually the most outstanding men’s and women’s college players. “It’s great to see SI recognized, as it was recently by Congressman John Carney (DE), who co-founded lacrosse at SI,” said Howard. “He celebrated the school as being one of the great feeder schools for elite college lacrosse programs. This says a lot about the school’s programs, staff and student athletes.”

A third generation San Franciscan who grew up in Merced Manor, Howard noted that his mother and grandmother were presidents of the Loyola Guild, his father was involved with the Fathers’ Club and his older brother, Arthur Howard, was class of ’66. “Father Carlin was a close family friend,” Howard added.

Now celebrating his 40th reunion year, Howard calls himself “a proud member of the Father Harry Carlin Heritage Society” and a man who has long-recognized the importance of including SI in his estate plan.  “I decided long ago to support the educational institutions that mattered most to me, so I took out a life insurance policy and named my grammar school (St. Stephen’s), my college (St. Mary’s) and SI as the beneficiaries. I believe SI is the premiere educational institution in the Western United States and one of the top Jesuit training grounds for leaders in all fields around the country and throughout the world.”

Serving on the planning board of SI’s DC Alumni Chapter has helped Howard stay connected. “The recent additions to the campus, like the sports fields in Pacifica, are amazing,” Howard said. Long interested in the arts, he also looks forward to the prospect of a new theatre. “I look at the great actors, instrumentalists and singers and other artists that have come out of SI. They are impressive and show the diversity of training available and the foundation SI sets for the arts, literature, law, business, technology and science.”

Quality education, he added, “should be based on merit and be open to all, so we need to look at how we support the students that come through SI. So I say give money, give often, give it now and give it in the future.”