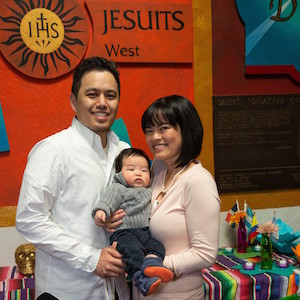 Christine Abalos Tsu ’02 isn’t simply a former Alumna of the Year - an honor she received in 2018 for her work as an exemplary class representative and as an active member of the Alumni Board.

She is also the youngest person to join the Father Carlin Heritage Society - something she thought she could only do years from now after she had earned enough money to leave part of it to the school.

“Then I became aware that I could include part of the life insurance policy and 401K plan that I have thanks to my job, and I could do this earlier than I thought,” she noted.

A manager at KMPG, Tsu had previously worked as an IT analyst at PG&E and for Boston University.  She encourages young professionals such as herself “to learn about the Father Carlin Heritage Society and see if at this point in their lives there is something they can contribute. We’re making more in our 30s than we did in our 20s, and we may already have enough to share.”

SI, she added, “taught me that what makes me truly happy is community and a job that I enjoy. I just want enough - I don’t need all the extras. Now that I have time to reflect, I want to see how I can give future students at SI an experience similar to my own. By adding SI to my estate plan, I can be even more involved in the school that I love.”

SI, she added, reinforced and taught important values to her and to her sisters - Catherine Abalos ’05 and Charlene Abalos Gueco ’99. “I still remember the valedictory speech when my older sister graduated. SI teaches us not just to be for others but to be by and with them. I found that my community of peers and teachers molded me and inspired me to serve outside of SI.”

A new mother - her son, Elliott, was born Aug. 1 - Tsu hopes to organize a mothers’ group for fellow SI grads who can learn from each other. “When I talk to other SI moms, I find they are in line with my values and views, and I want my child to grow up this way, surrounded by people who are special to me.”

In joining the Father Carlin Heritage Society, she also knew “that Elliott would have more than enough to get by as an adult. What I am leaving to SI might seem a small gift to some, but it would mean a lot to a student whose family would otherwise struggle with tuition. I felt lucky to attend SI, especially as my own parents were immigrants from the Philippines. In high school, I found an extension of the values I had learned at home. Of all the schools I have attended, SI is the most special to me for this reason, and I want to pass along that same experience to a deserving student.”

Tsu singled out for praise teachers such as Peter Devine ’66, “whose class I loved although I was not very vocal. I was also close to Mrs. Quattrin, who taught me AP Calculus and who moderated CSF when I was president. I also loved Mrs. Yap and saw her as an extension of my own parents.”

At UCLA, she was part of her sorority’s leadership team and majored in psychology, which “helped me understand myself and others, and that skill has proven valuable in my work.”

Along the way, she received awards for her leadership. UCLA honored her with its Chancellor Service Award for her work raising funds to support the school’s UniCamp, a program for underprivileged children.

KPMG also recognized her last year with an award for her leadership skills. This and her other awards have a tinge of irony, she added, “as I like working in the background and am not comfortable with big audiences. The projects I work on make it seem otherwise, but I don’t like being the center of attention.”

Receiving SI’s Alumna of the Year award, she added “was such an honor, especially seeing the great alumni who came before me. I hope to serve at their level one day.”

If you would like information about joining the Father Carlin Heritage Society, contact Planned Giving Coordinator Annie Reilly at (415) 731-7500, ext. 5122, or email her at areilly@siprep.org.