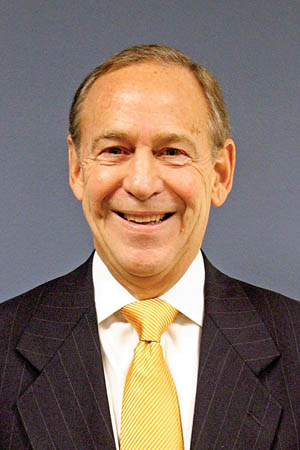 Charlie Krystofiak ’69, who swam and played basketball for SI in his freshman year, decided to trade in his largely bench-warming roles for after-school work to earn a paycheck. By his senior year, he was earning good wages stocking shelves and working the cash register at a neighborhood market.

He credits SI for some of this early business success. “I took public speaking from Vince Tringali,” he recalled. “He helped me to communicate and be outgoing with customers and colleagues.”

Graduating from SI at the height of the Vietnam War, Krystofiak joined the Army Reserves. He found that SI had also prepared him for boot-camp discipline. He remembers sitting ramrod straight in detention at SI, staring at a dot on the wall for an hour under the watchful gaze of SI history teacher “Uncle” Frank Corwin. “When I went to boot camp, I was ready,” he said, with a wry smile.

When he completed his military service, his former boss at the market invited him to dinner. “He tried to sell me an insurance policy,” Krystofiak recalled. “That got me interested in the business.” He parlayed his knack for turning hard work that earned income into a 35-year career in the insurance industry, retiring at age 55, passing his practice on to his son, Kevin.

“I wasn’t the best student, and I never went to college,” he added. “I was lucky to graduate from SI. But one thing I took from that experience was a sense of compassion,” something he discovered was alive and well at the school when his mother, Marie, died in 1999. After 30 years of only occasional contact with SI, he received letters of condolence, first from Rev. Anthony Sauer, S.J., and then from Rev. Harry Carlin, S.J. ’35. “Those letters reengaged me in the school,” he said.

A new member of SI’s Planned Giving Advocacy Group, he has made SI a beneficiary of his retirement plan. “SI has meant a lot to me,” he said, reflecting on how his experiences in high school and in the working world seemed to reinforce one another.

As a financial professional, Krystofiak had seen many of his clients upset when forced to take taxable income in the form of mandatory IRA distributions they neither needed nor desired. “They’re even more upset when they learn that what’s left in their IRA account at death can be hit by both estate tax and income tax, leaving their heirs with 30 cents on the dollar.”

He recommends leaving “taxable assets to non- taxable entities like SI and non-taxable assets to your heirs. I hope those reading this article who want to leave something to SI will at least consider discussing this option with their advisors.”