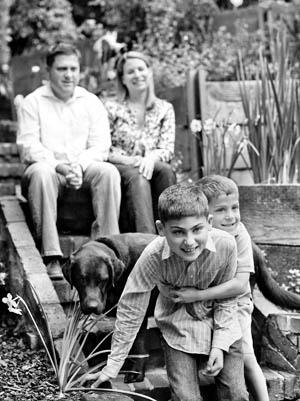 Brian Heafey Doubles Down on SI with Bequest & Scholarship

After graduating from Stanford with a degree in economics in 1990, Brian Heafey ’86 moved to the East Coast and worked for E&Y Kenneth Leventhal Real Estate Group on distressed real estate debt. Then, based in Japan, he did the same throughout Asia, buying and selling commercial loans.

In 1999, he joined Pacific Coast Capital Partners, a San Francisco-based real estate investment company, where, 13 years later, he now oversees over $3 billion of debt investments. He and his wife, Jennifer, also make sandwiches once a month for homeless men at the St. Vincent de Paul Society Multiservice Center at 4th and Folsom Street in San Francisco.

“I graduated from SI and my wife graduated from Loyola Baltimore,” he said. “We try and be good examples for our two boys, John, 7, and Luke, 9, through involvement in various charities.” Those include the Guardsmen, where Brian served on the board, and Hanna Boys Center, on whose board Jennifer still serves.

Brian has shown extraordinary loyalty to SI by doubling down on the school. His brother Michael ’82 encouraged Brian and his brother Bill ’83 to work with him to endow an SI scholarship fund and Brian has gone a step further and included a bequest to the school in his living trust.

“I received financial aid when I was there,” he said, referring to the SI scholarship he got after graduating from St. Brendan’s School. He added that SI, where he participated in cross-country, track and drama, offered more than a good education. “The Jesuits do a very good job of having boys come in as freshmen and leave as men.” He added that the Jesuit connection continued for him at Stanford, where former SI president, Rev. Russ Roide, S.J., ran the Newman Center.

He said that economist John Rudledge has helped him negotiate the world of high finance with his humanity intact. He keeps near at hand a list of business principles Rudledge authored. A sample: “Allowing your opponent in a transaction to walk away with his dignity, his humor and his hearing intact, and a pretty good deal in his pocket, is the right way to do business.”

Heafey, who enjoys coaching little league baseball, backpacking and fly-fishing, wants his SI bequest to help young people not only to gain a good education but also “to mature in a supportive environment.” Brian traced his basic formation to St. Brendan’s and SI, where he learned a simple principle that he said has served him well in a complex world: “They taught me to treat people fairly.”