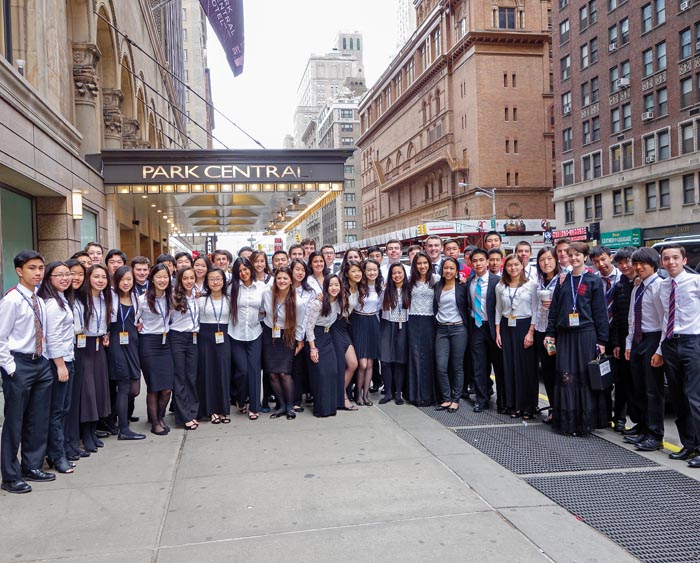 The Chamber Singers shortly before their April 27, 2014, performance at Carnegie Hall. Go to iTunes in the fall to purchase songs recorded in NY.

SI’s Orchestra (above) and Chamber Singers (below) made school history in April 2014 by playing on the most famous stage in the U.S. — Carnegie Hall. 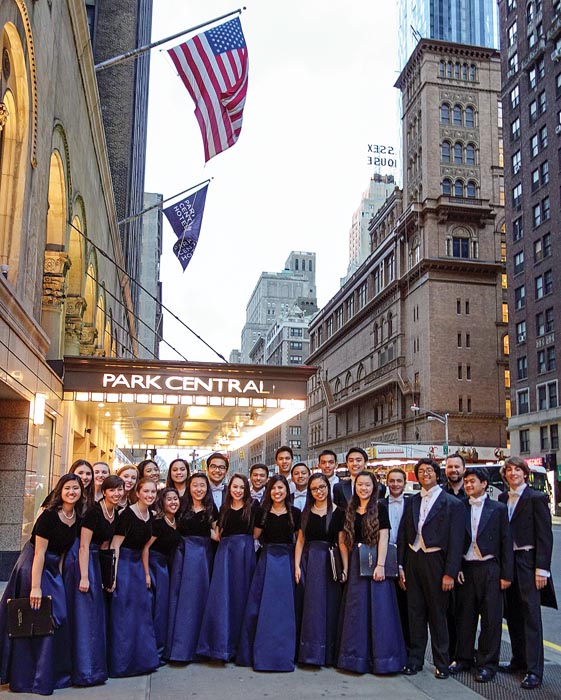 Both groups sent in audition tapes to qualify for this honor, and the Chamber Orchestra, which performed before judges, received the highest honor in the adjudicated performance.

The orchestra was invited to apply for the Carnegie performance by the New York International Music Festival, arranged by World Projects Music Festivals and Tours, after a performance at the Catholic Schools Concert at Sacred Heart on in 2013.

“As far as I know we were the only group out of seven Bay Area Catholic Schools invited to apply,” said Orchestra Director Gillian Clements. “We then had to submit a recording and were accepted. The organization only takes six high schools and two colleges nationally. Our string chamber orchestra was specifically invited to play the majority of the 20-minute concert, and the whole orchestra was invited to join in for the one additional piece.”

The Chamber Singers, said SI Choral Conductor Chad Zullinger, “were chosen not just because of their level of performance this year. I had to send in several years’ worth of recordings of our performances. The organizations that accepted our ensembles to Carnegie Hall wanted to observe a high degree of music-making from both past and present groups to be eligible to take the stage. Our students can thank past ensembles in addition to their own talent and hard work for bringing them to Carnegie Hall.”

Clements was unable to accompany the 60 students in her symphonic and chamber orchestra as she was in the last weeks of her pregnancy and her doctors advised she not travel. Zullinger accompanied her musicians as well as the 24 members of SI’s Chamber Singers to New York, shepherding them along with parent chaperones.

Fortunately, Zullinger has had prior experience conducting instrumental ensembles in past teaching positions, and he currently conducts the Spring Musical at SI.

“It’s always nice to stand in front of instrumentalists when the opportunity presents itself,” said Zullinger. “It felt as if I were returning to my roots.”

Before the orchestra’s April 23 performance, Zullinger paused at the doorway leading to the stage and took a photo with his cell phone to show his singers what they would see before their April 27 show.

“It felt wonderful standing there, looking out at the same stage where so many famous conductors and musicians have stood over the years. I had to take in that moment.”

Earlier, during a rehearsal for the orchestra, he said something to help the instrumentalists appreciate the import of their time in New York.

“For our rehearsal, the judges and stagehands closed the doors and gave us 15 minutes by ourselves in the hall. Rather than stand on the podium to start conducting, I stood at the side of the podium and told the musicians that, at this point, the time to refine or rehearse the music was behind us. They knew the pieces so well. I told them to be present in the moment and to know that they have become part of the fabric that makes this stage so great.”

He reminded them that they were playing in Carnegie’s Isaac Stern Auditorium, named for the famed violinist who had also played and conducted there. “Now, our students were playing there too. Having them know that somehow made the music sound better.”

As brilliant as the orchestra sounded during its performance, the students “played even better in the rehearsal. They knew they were on hallowed ground, and they played in that moment. It wasn’t about the ranking or refining anything. It was all of us taking part of something sacred to the venue.”

Zullinger was equally proud of his singers, most of whom had never before sung as part of a large concert choir ensemble. They joined hundreds of young men and women who had come together to form the National Youth Choir for the annual WorldStrides Heritage Performance. That experience also brought back memories for Zullinger, who years ago had sung at Carnegie Hall while he was in graduate school.

“I wanted my kids to have the opportunity that I had, to be part of something larger than what we are most familiar with as a chamber choir at SI.”

He was also proud of Bray McDonnell ’15 and Joshua Marrald ’15, who sang solo parts in the spiritual “Walk in Jerusalem” and in “Dominus Vobiscum.”

“For the last number, the only voice you could hear for the last few notes was Bray’s,” said Zullinger. “That’s something he will always remember.”