Curtis Mallegni ’67, chair of SI’s Board of Trustees and Regents, leaves a legacy of service
Mar 16 2020 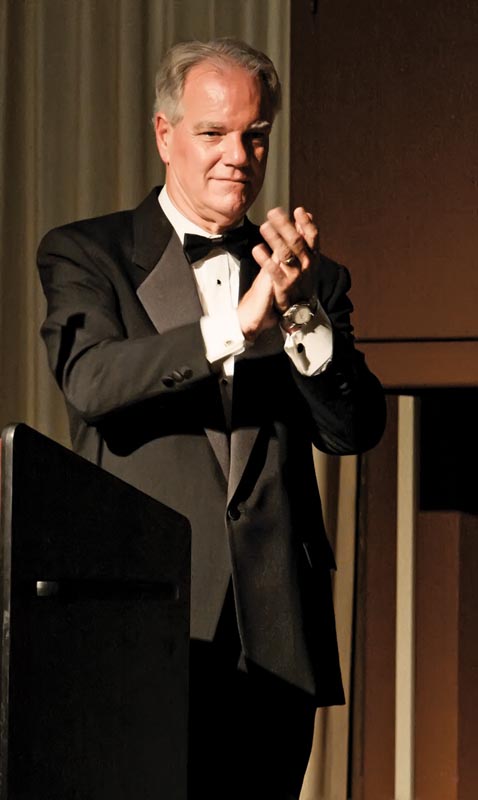 Curtis Mallegni ’67, a former chair of SI’s Board of Trustees and Board of Regents and one of the school’s most fervent supporters and trusted advisers, died Jan. 28 after a short illness. He was 70.

Most people don’t know just how hard Mr. Mallegni’s life became when, at age 10, he saw his 41-year-old father die after a long illness.

“We had no health insurance and were suddenly destitute,” he recalled in a Genesis interview shortly after he was named chair of the Board of Regents. “My mother worked at a variety of jobs, including swing shifts to make ends meet. I’d often come home to find a few dollars on the table with a note telling me to buy a burger at the diner down the street. Fortunately, I grew up next to great families in Cow Hollow who knew I did not have a father and who reached out to me.”

He followed his friends to SI, and his mother managed to scrape together enough money to pay his tuition for the first year. “After that, we hit a wall. My mother told the Jesuits that we were broke. Somehow, guardian angels materialized. I never had to worry about tuition as long as I was at SI.”

He owed his success, he noted, in large part to SI. “It gave me my friends and enriched my life. SI gave me the best educational experience I had and made me feel part of a family that included the Jesuits and my teachers. They lived out the philosophy of cura personalis — of care for the whole person. That was just what I needed. I’m most grateful, and, in what ways I could, I tried to repay some of that debt.”

While in high school, he played drums for the Vandals at various teen clubs, and he wrote about his experiences in Genesis magazine, including going to school just blocks from the corner of Haight and Ashbury right before the Summer of Love.

“We did this, ironically, in the context of our Jesuit influence. While my opinions and perceptions changed, I remained moored to the steady dock of Discipline, Order and Tradition that was SI. Many of my friends fought for social justice and many who sought fulfillment as artists did so influenced by the iconography and culture of their faith as well as these heady times.”

In Spiritus Magis: 150 Years of St. Ignatius College Preparatory, he wrote of his experience being taught by Anthony P. Sauer, S.J., who would later become his friend and confidant. “He called me either ‘Chief,’ or ‘Big Curt,’ or ‘Curt babes.’ He humored himself with our names as well as our own adolescent attempts to be cool. Little did we realize that we were in the midst of such a formidable wit and intellect who would become the intellectual beacon of SI. He was way ahead of us, and we rarely got ‘his drift’ as hard as we tried. Yet he endured as one of the truly great friends of our class, then and now. If only we could go back and take it all in anew with a slightly better chance of understanding what he was talking about.”

After graduating from SI, Mr. Mallegni attended USF and UC Berkeley for his bachelor’s degree and studied at night for law and MBA degrees while working full time, graduating from the San Francisco Law School in 1975 and earning an MBA in 1984 from Golden Gate University.

He worked as an attorney in private practice before joining Wells Fargo, where he worked in several divisions of the bank before retiring in 2008 as a senior vice president in the Commercial Mortgage Servicing Division.

He was active in St. Cecilia’s parish, where he chaired the parish council and was one of the founding members and presidents of the Men of St. Cecilia. He served as a basketball coach there for 30 years and was honored by the CYO for his dedication to his athletes.

Mr. Mallegni renewed his relationship with SI when his children enrolled at his alma mater. He later served as president of the Fathers’ Club and, together with the Ignatian Guild, worked to ensure that students in financial straits enjoyed the same safety net of scholarship aid that had helped him in the 1960s. He also served as chair of the search committees for a new principal and president.

When he stepped down as Fathers’ Club president, he left behind advice for those coming after him. He wrote in his letter to future presidents “never forget we do all this for our kids. We lose our way when we become wrapped up in the politics and efficiencies of the process. The kids are our top priority. Make sure that everything we do has a connection to the kids, the school and the school’s goals. If you do, the work will always be relevant and enjoyable. You’ll never need to ask yourself why you are doing something.”

“He was the heart of our class and beloved by all,” said former SI religious studies teacher Michael Shaughnessy ’67. “He loved SI more than anybody I know. I am honored to have been his friend. There is less joy and humor in the world now that he is gone.”

“As board president, Curtis went on retreats, visited classes and came to activities because he believed SI should always celebrate students,” added his friend Peter Devine ’66. “When their children attended, Curtis and Kathy lovingly hosted cast parties and team dinners in their home because they believed in the value of the Ignatian family. His life has been a blessing to the Stanyan Street grads.”

Mike Silvestri ’67, his classmate and close friend and the former business manager at SI, added that he had “visited Curtis a few days before we left for a vacation. We shared our good times, laughed and were emotional as well. We have lost a good and loving man, the heart of the class of 1967.”

Mr. Mallegni is survived by his wife, Kathy, and their two children — Dan ’99 (Alexandra Tredinnick ’99) and Francesca ’02 (Gregory Ohanessian ’02) — by grandchildren Colette, Jack, Matthew and Joseph, and by many relatives.

The family asks that donations in Curtis’ memory should be made to ICA-Cristo Rey, SI, the Father Sauer Academy or to your favorite educational charity. Or simply raise a glass of good wine and think of him.