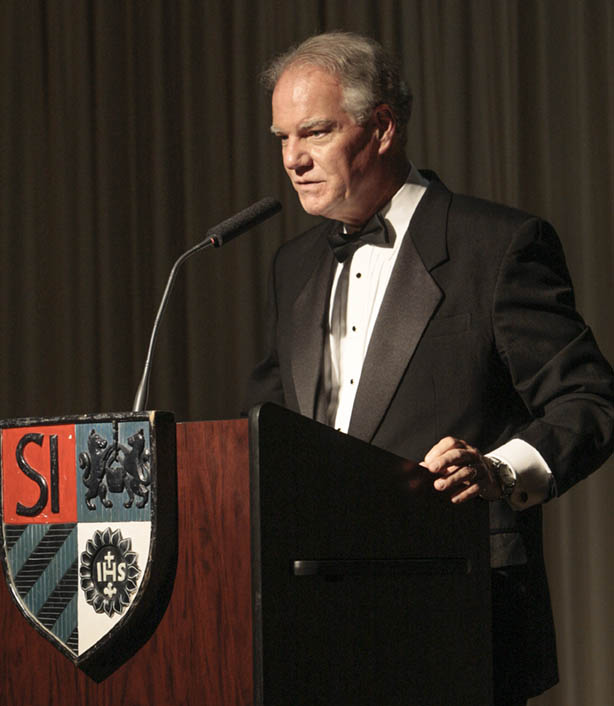 Curtis Mallegni ’67, a former chair of SI’s Board of Trustees and Board of Regents and one of the school’s most fervent advisors and supports, died Jan. 28 after a short illness. He was 70.

Most people don’t know just how hard Mr. Mallegni’s life became when, at age 10, he saw his 41-year-old father die after a long illness.

“We had no health insurance and were suddenly destitute,” he recalled in a Genesis interview shortly after he was named chair of the Board of Regents in 2008. “My mother worked at a variety of jobs, including swing shifts to make ends meet. I’d often come home to find a few dollars on the table with a note telling me to buy a burger at the diner down the street. Fortunately, I grew up next to great families in Cow Hollow who knew I did not have a father and who reached out to me.”

He followed his friends to SI, and his mother managed to scrape together enough money to pay his tuition for the first year. “After that, we hit a wall. My mother told the Jesuits that we were broke. Somehow, guardian angels materialized. I never had to worry about tuition as long as I was at SI.”

He owed his success, he noted, in large part to SI. “It gave me my friends and enriched my life. SI gave me the best educational experience I had and made me feel part of a family that included the Jesuits and my teachers. They lived out the philosophy of cura personalis—of care for the whole person. That was just what I needed. I’m most grateful, and, in what ways I could, I tried to repay some of that debt.”

While in high school, he played drums for the Vandals at various teen clubs, and he wrote about his experiences in Genesis magazine.

Of his experience going to school blocks from the Haight-Ashbury right before the Summer of Love, he noted that the music of his era “initially seemed foreign to us but eventually proved compelling. We listened to Sgt. Pepper’s Lonely Hearts Club Band over and over again and, like Mr. Holland, we couldn’t stop listening. Sgt. Pepper changed the way we thought about everything, and I felt excited by the promise that all society would be rejuvenated. We stretched ourselves to think in broader terms and pondered the imponderable.

“We did this, ironically, in the context of our Jesuit influence. While my opinions and perceptions changed, I remained moored to the steady dock of Discipline, Order and Tradition that was SI. Many of my friends fought for social justice and many who sought fulfillment as artists did so influenced by the iconography and culture of their faith as well as these heady times.”

In Spiritus Magis: 150 Years of St. Ignatius College Preparatory, he wrote of his experience being taught by Anthony P. Sauer, S.J., who would later become his friend and confidant. “He called me either ‘Chief,’ or ‘Big Curt,’ or ‘Curt babes.’ He humored himself with our names as well as our own adolescent attempts to be cool. Little did we realize we were in the midst of such a formidable wit and intellect who would become the intellectual beacon of SI. He was way ahead of us, and we rarely got ‘his drift’ as hard as we tried. Yet he endured as one of the truly great friends of our class, then and now. If only we could go back and take it all in anew with a slightly better chance of understanding what he was talking about.”

After graduating from SI, Mr. Mallegni attended USF and UC Berkeley for his bachelor’s degree and studied at night for law and MBA degrees while working full time, graduating from the San Francisco Law School in 1975.

He worked as an attorney in private practice before joining Wells Fargo, where he was employed in the Real Estate Merchant Banking Division before being promoted to senior vice president.

Mr. Mallegni renewed his relationship with SI when his children enrolled at his alma mater. He later served as president of the Fathers’ Club and, together with the Ignatian Guild, worked to ensure that students in financial straits enjoyed the same safety net of scholarship aid that had helped him in the 1960s. He also served as chair of the search committees for a new principal and president.

When he stepped down as Fathers’ Club president, he left behind advice for those coming after him. He wrote in his letter to future presidents “never forget we do all this for our kids. We lose our way when we become wrapped up in the politics and efficiencies of the process. The kids are our top priority. Make sure that everything we do has a connection to the kids, the school and the school’s goals. If you do, the work will always be relevant and enjoyable. You’ll never need to ask yourself why you are doing something.”

"The entire SI community is so saddened by Curtis's passing," said Joe Vollert ’84, SI's vice president for development. "We are so proud to count him among our alumni and are so grateful to him for his years of extraordinary service to our alma mater as chair of both our Regents and Trustees. He was a man of faith whose goodness always shone forth and whose care for the entire SI community lay at the heart of his service. We send our deepest condolences to his wife Kathy, to his children Dan '99 and Francesca '02 and their families, and to his brothers in the Class of 1967. We will miss him dearly."

“He was the heart of our class and beloved by all,” added former SI religious studies teacher Michael Shaughnessy ’67. “He loved SI more than anybody I know. I am honored to have been his friend. There is less joy and humor in the world now that he is gone.”

“As board president, Curtis went on retreats, visited classes and came to activities because he believed SI should always celebrate students,” added his friend Peter Devine ’66. “When their children attended, Curtis and Kathy lovingly hosted cast parties and team dinners in their home because they believed in the value of the Ignatian family. His life has been a blessing to the Stanyan Street grads.”

Mike Silvestri ’67, his classmate, close friend and former SI business manager, added that he had visited him “a few days before we left for a vacation. We shared our good times, laughed and were emotional as well. We have lost a good and loving man, the heart of the class of 1967.”

He is survived by his wife, Kathy, and their two children — Dan ’99 (Alexandra Tredinnick ’99) and Francesca ’02 (Gregory Ohanessian ’02) — by grandchildren Colette, Jack, Matthew and Joseph, and by many relatives.

Here is the obituary that appeared in the San Francisco Chronicle:

Curtis John Mallegni was born on October 30, 1949 in San Francisco to the late Silvestro and Geraldine (Curtis) Mallegni. He passed away on January 28, 2020 at Davies Medical Center with his family at his side.

Curtis was the much-loved husband of Kathy (Rende) Mallegni for 42 years. He was loved by his children, Dan Mallegni and Francesca Ohanessian, and their spouses Alexandra and Greg. The lights of his life were his four grandchildren, Colette, Jack, Matthew and Joseph. He will also be missed by his sister, Kathleen Baruch, and her children and grandchildren – Armand, Martin, Gina, Pamela, Zachary, Ava, Nathan and Joshua Molina.

Curtis grew up in the Cow Hollow district in San Francisco. He attended elementary school at Yerba Buena Public School, Saints Peter and Paul School, and graduated from Saint Vincent de Paul School, where he made many dear and life-long friends.

He graduated from Saint Ignatius High School as a proud and loyal member of the Class of '67. He was forever grateful for the support and mentorship he received at St. Ignatius. While in high school, he was the drummer for the Vandals, a garage band well known by many San Franciscans of a certain age. He continued playing the drums as a hobby throughout his life and loved his two Vandal's Reunions in North Beach.

He attended the University of San Francisco for two years and then transferred to UC Berkeley, where he earned a Bachelor of Arts Degree in 1971. He graduated in 1975 from San Francisco Law School and became a member of the California Bar in November 1975. He also earned a Master's Degree in Business Administration at Golden Gate University in 1984.

Curtis practiced law for three years and then in 1979 he accepted a position with Wells Fargo Leasing Company. Over the next 29 years he remained at Wells Fargo in various divisions and retired as a Senior Vice President in 2008.

While banking was his career, his passion was helping others. Curt volunteered for just about everything while his children attended St. Cecilia's School, and continued to volunteer long after they graduated. He was one of the founding members and presidents of the Men of St. Cecilia; organized the first several Pancake Breakfasts; wore a bright red suit for the children on many winter occasions; was the Chair of the Parish Council and a member of the Liturgy Committee; helped couples with marriage preparation;and was a Knight of St. Cecilia Church. For 30 years, he coached basketball, for lower-division teams so that his players would learn to love the game and be a part of a team, even if they would not continue to play after grammar school. He was recognized in 2013 by the Catholic Youth Organization for his many years of coaching.

Curtis renewed his relationship with SI when his children enrolled at his alma mater. In 1995, he joined the Fathers' Club Board and became its president in 2000. Together with the Ignatian Guild, he worked to ensure that students in financial straits enjoyed the same safety net of scholarship aid that had helped him in the 1960s. Beginning in 2003 through 2013, he was a member and later chair of both the Board of Regents and the Board of Trustees.

In his retirement, when Curtis was not volunteering for one of his favorite schools, he spent many happy hours with his grandchildren. They gave him immense joy and returned his love. He was happiest whenever he was with his family. He was an avid reader, a crossword puzzle and Sudoku addict, occasional clarinet player, traveler, Lake Tahoe lover, proud native San Franciscan, and a frequent neighborhood walker. He felt that as he walked through West Portal he had to run into at least three people he knew. He usually did.

Curtis was a very humble man who was always grateful for his family and friends, and the life he lived. He felt that he was responsible for making everyone he met feel valued. He will be fondly remembered and missed.