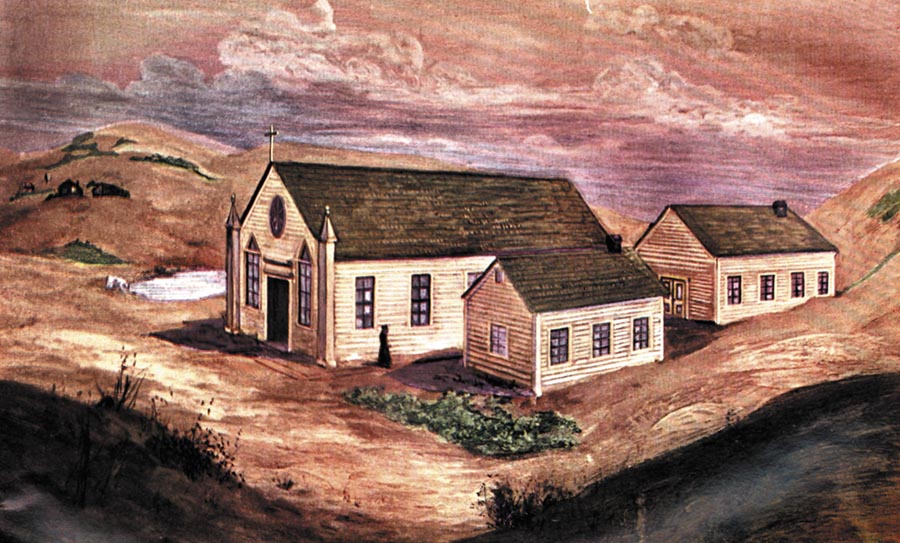 Rev. Anthony Maraschi, a Roman Catholic priest and a member of the Society of Jesus (the Jesuits), founded St. Ignatius Academy in 1855 in a one-room schoolhouse on Market Street (pictured above). In 1862 the second campus rose right next door (the site of the current Westfield Mall and the old Emporium). In 1880, SI moved to Hayes and Van Ness and became the largest Jesuit school in the U.S. That all came to a crashing halt in 1906 when the Great Earthquake and Fire destroyed “the Jewel in the Crown.”

Five months later, SI built its fourth campus at Hayes and Shrader (across from what is now St. Mary’s Hospital near Golden Gate Park). That “temporary” campus lasted until 1929 when SI moved to Stanyan Street, the home of Ignatians for 40 years.

In 1969, students left their old high school behind and moved into a new 11.4-acre college preparatory campus in the Sunset District. The school became coeducational in 1989 and now stands as one of the region’s leading schools.

In its long history, the school has drawn outstanding men and women to its faculty and has inspired and educated students to make the world a better place.

Click on the links on the side for more on SI's remarkable history, one that mirrors the history of San Francisco and the West.

See archival photos of SI from the 1850s and beyond here.

See archival videos of SI from the 1930s and beyond here.